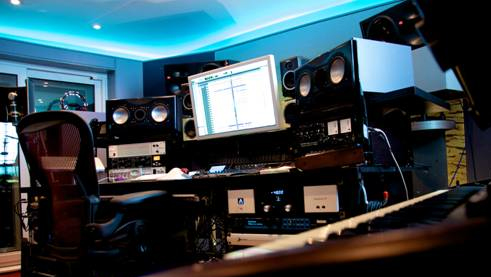 James Reynolds was first recommended to Kazbar Systems by producer/composer Matt Schwartz in 2005 when James (who had previously shared studio space within East London’s Truman Brewery complex with fellow dance music producers Soul Avengerz & Hoxton Whores) decided to venture out on his own and invest in his own studio closer to his West London home.

James found a studio room to rent in Nicky Graham’s Maximum Music studio complex on Heathman’s Road (home to many studios and creative companies) and quickly started formulating his equipment list with advice and technical assistance from Kazbar Systems.

Move forward to 2014 and James has moved one studio along the corridor, to a larger space to allow for his Yamaha DM2000 Mixing Console and more comprehensive equipment list.

The previous occupier of the studio space had his studio orientation differently to how James wished to work. Because of this, the studio needed to be acoustically redesigned from the ground up. All acoustic panels needed to be taken out and replaced and a new acoustic ceiling installed to suit the new orientation.

We installed large panels behind James’s studio workstation allowing enough space for his Neumann KH420 Studio Monitor Speakers which had to be raised high enough as to allow for decent listening for his Unity Audio Boulder Speakers too.

The new layout allowed for a sofa behind James’s workstation. This was taken into account when providing the acoustic specification for the studio. Also, further behind the sofa was enough space for a second audio editing setup for James’s assistant.