Ben Cullum has been gradually upgrading his West London based Sunhatch Studio over the past 10 years. Ben was originally recommended to Kazbar Systems by producer James Reynolds as Ben was looking to make some changes to the equipment he had at the time.

This was the beginning of a gradual studio transformation for Ben. The first recommendation was upgrading Ben’s audio interface to an Apogee Ensemble. The Ensemble provided significant improvements in dynamics, headroom and clarity in the mix, something which Ben noticed immediately with the sound over his previous audio interface.

After working with his new audio interface for a few weeks, Ben felt that improving his speaker monitoring  system was the next aspect of his studio setup to be addressed. Ben had been impressed with the sound from James Reynolds’s Focal Twin 6 BE’s and arranged a demo at his studio. It is always important to demonstrate speakers within your personal recording environment as the performance of different speaker brands and models can vary within different playback environments due to the speaker design and inherent room acoustics.

The Focal Twin 6BE’s ticked the boxes for Ben. He was happy with the sound he was hearing within the studio and the way his mixes were translating from outside of the studio.

With his new set of speakers and audio interface, Ben turned his attention to making the most of his new sound. Ben wanted to integrate outboard into his studio along with a degree of mixing. Being able to separate elements of audio (such as drums, bass, vocals, synths etc) adds space and presence to a mix. After considering options, Ben chose the Dangerous Music D-Box due to the fact that it is an all in one solution for Summing, Speaker Volume Control and Talkback. 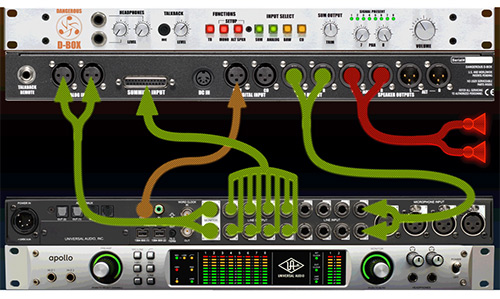 Ben was very happy with the recording and mixes from his studio but felt that it would be great to able to tweak the sound a little bit more before his final mixdown. He had read and heard great things about the Dangeous Music BAX EQ, a simple EQ unit which control only the EQ Hi’s and Low’s. This is precisely what Ben wished to tweak within his final mix.

This studio setup provided an excellent solution for Ben but after a while, he felt that being only able to separate a maximum of 8 outputs through the B-Box had become restrictive due to the size of the recording sessions.

Ben had also been reading (and hearing) great things about the Neve 8816 Summing Mixer. Neve has a legendary sound to their hardware which adds a certain ‘texture’ to mixes.

To benefit from the Neve’s 16 inputs, Ben needed to upgrade his audio interface once again to provide more outputs. There are a number of high end audio interfaces to choose from but Ben’s favoured choice was the Antelope Audio Orion 32 due to it’s connectivity and amazing audio converters.

Additional items Ben chose throughout the studio upgrade were an SE Gemini II and Reflexion Filter for his general purpose vocal microphone and recording solution along with two Mic Preamp Channel strips to give him complete versatility with his vocal and instrument recordings. The Avalon 737SP and the Focusrite ISA430MKII.

Ben is an acclaimed artist, singer songwriter and producer whose works include performing on his brother Jamie Cullum’s hugely successful albums and co-writing the huge hit These Are The Days. Recent credits also include working with Rizzle Kicks, Jimi Charles Moody, Matt Cardle, The Egg and many more.