Client Requirement: To supply a sound system which delivers a full and coherent sound to people within the Boardroom, improve the acoustics of the Boardroom to complement the new speaker installation and reprogram the previously installed AMX Sound System to improve the user interface and fix the previously supplied digital video camera.

To have an accurate dispersal of sound where the listeners inside the space have an enjoyable and accurate listening experience, the room needs to be acoustically accurate in terms of the materials used during the construction plus correct use of speaker positioning.

Due to the materials used on the walls in the original design and construction, the acoustic performance of the boardroom at Universal Fulham was quite poor. 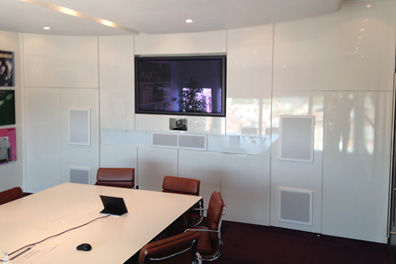 Kazbar Systems remedied these issues by proposing an alternative speaker solution to the system Universal  were currently using (which was causing further sound issues due to sound reflections).

After the new speaker system was agreed (after testing various speakers within in the room) we then rebuilt the forward enclosure which faced the boardroom table to house the speakers properly, plus treated the areas around the speakers with acoustically absorbent material to help focus the sound and improve the dispersion.

We also rebuilt the ceiling panel which also which also included lighting too as the original panel was actually reflecting sound rather than help improve it.

Before we proposed an alternative, Universal were using a quadraphonic B&W passive speaker system. This was originally installed so the sound would be evenly distributed around the office so all board members would get an even sound reception.

This unfortunately caused sound problems due to the acoustics at the time not complimenting the speakers plus the speaker positioning and actual size and performance of the speakers not working with the room.

We then commissioned extensive speaker trials within the boardroom, focusing the positioning of the speakers we were testing facing them down the boardroom from where two of the original B&W speakers were originally mounted within a purpose built AV enclosure. 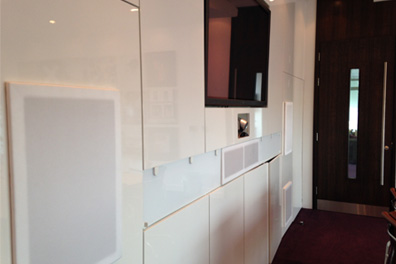 The view being if we could get the required audio response from the speakers in a better listening position from within the enclosure, this would solve the sound reflection issue plus still allow for all board members to  get the required listening experience.

The speakers which were chosen due to their sound performance, all round sound accuracy and delivery were the Genelec 1037A’s. They provided an excellent sound performance of all frequencies in the boardroom plus we rebuilt the AV enclosure to house them so they could be raised slightly plus we treated the enclosure with acoustic material to optimize the sound delivery into the boardroom.

Part of the original installation was an AMX preamp and control system which could interface to the Boardroom telephone system. From there you could them choose the source of what could be watched on the large LCD TV Display, listen from CD or MP3 or choose a Skype call which then engaged the central digital camera. 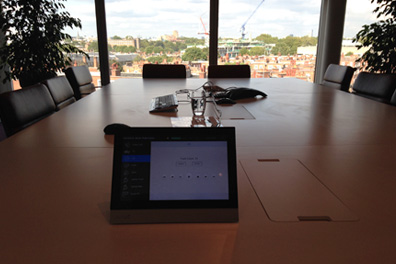 We created a space within the AV enclosure directly in front of the boardroom table but at the correct height so everyone sitting around the table could be seen.